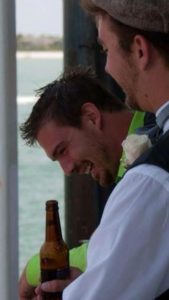 The Mission of Cory’s Hope Foundation:

“To provide funding for programs proven to support at risk / disadvantaged children to improve their educational success, provide ongoing advocacy, inspire positive change, leadership and character development, and enable them to visualize their future clearly.”

Cory R. Scott was born in Fairfax, Virginia in 1987, and from the very beginning he was on the move.  He was always going and doing, and questioning everything. He grew up in Lorton, Virginia with his older brother Jesse, who he idolized, but oh the fights they would have.  In keeping with his “I can do anything” attitude, there were a few concussions, and a couple trips to the hospital. He loved sports, played baseball and basketball (forever #20), but had a passion for baseball. He had a competitive nature that would sometimes get him in trouble, just ask anyone who played with, coached or umpired his games. He received good grades in school, although he sometimes had difficulties with the rules.Cory never met a stranger, we used to worry about him when he was young that he would go off with anyone that would talk to him. He had hundreds of friends and would do anything for them. Even with his tough guy exterior, he was sensitive and caring. He loved the beach, fishing and all types of music, and still played baseball/softball as an adult.

It was in High School when he got his passion for teaching. His History teacher had reached him and he wanted the chance to do that for other kids. So once he made up his mind to teach, there was no stopping him. He attended Northern Virginia Community College for a year and then took off for Florida. He attended St Pete College for a year and then transferred to USF to get his degree in Secondary Social Science Education. He loved to teach and he was skilled at reaching kids that no one else could reach. After he graduated he started teaching History and coaching the Baseball team at Lakewood High School. He then found his true calling at Richard L. Sanders, where he excelled at reaching his students so they could achieve their goals. He cared about his students, he actually took off and gave his dress shoes to a student who needed a pair for an after school function, this was typical of Cory. His future, as he often described it, was to return to school to work on a Masters in Psychology so he could focus on counseling young, at risk kids to get them on a better path. He was an excellent role model to students and fellow teachers alike.