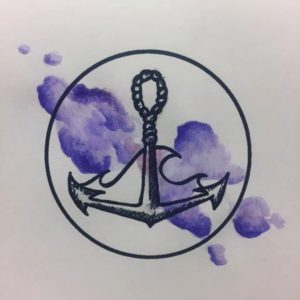 Hey World. Its me, Kate Toth. I am a Suicide Survivor. I am also a Suicide Loss Survivor. I lost my bestfriend Cory Scott on December 9, 2013. He ended his own life and frankly, I still can’t make sense of it.  I put off feeling the pain for too long. I can’t pinpoint the moment Crossing Over was created in my mind. I just know living in misery was no longer an option.

Do we ever know how or when we start something? A movement? An oath to honor our “I can tell you anything”, “No matter how far or how long we go without talking, we will always be bestfriends” kind of people in our lives? All I can really recall is taking a deep breath in and exhaling all the toxins that tell my brain, “you will never feel better”. I just wanted to stop feeling angry about my loss and perhaps if doing this could help others, there was hope for me too.

I was turning 30 the summer wanted to crush time through healing and feel these feelings. I wanted to help people that have experienced the same gut wrenching, life changing loss as I had. The questions of anxiety: Would it ever be the same? I drove myself mad asking, “Why?” and resenting God for taking him and many others away from me. It kind of just slapped me in the face and in that one magical breath, I told anger to kick rocks. With grace of course, I slowly began to let the light in. My ideas and journal entries were flooding with what would soon become a Non-Profit Organization for Suicide Awareness and Suicide Prevention that I’d been wanting to start for years.

What do we do? Who are we? What do we plan on doing? How can we help? Well, do you like music and song lyrics that can literally change your emotions instantly? Do you feel like you are the only one on the planet that is going through the loss of a bestfriend, a brother, a sister, a father or mother, a cousin, a therapist who you thought had it altogether, a doctor who couldn’t take the hours and never ending death, an alcoholic who couldn’t carry around the guilt any longer, a drug addict who gave up entirely, a classmate who you just met and bonded with on another level with, a teammate you swore would make it to the NBA, a guitar prodigy who changed the world with their sound, or a spoken word poet with rejection letters hanging on their wall and swore they’d never give up but did? The list unfortunately goes on. I set fire with what was just a simple conversation I had with a couple in California about how I was handed six different medications and sent on my way the morning I went downtown to Los Angeles back in 2015 asking for mental health help because I felt like I had no purpose anymore. That night I emailed multiple Suicide Awareness organizations expressing interest in volunteering.  I never heard back from any of them.

Starting my own organization would be my rebirth. Guys, we are approaching the 2 year anniversary of Crossing Over in August 2019. I could not do this work without the support we’ve been given so far.

I am steady on a mission to find resources for families who are experiencing this grief, for suicide survivors who feel like it’ll never get easier, and finding ways to raise awareness for this cause so Suicide Loss Survivors don’t ever have to go through this alone again. I can only hope that by doing this, I am helping others in their healing process and by sharing my experience, it will be one less drug overdose or one less suicide.